“It is beyond all question the crowning novelty of the Exposition as the Eiffel Tower was of the Paris Exposition.” – Chicago Daily Tribune (June 18, 1893).[1] 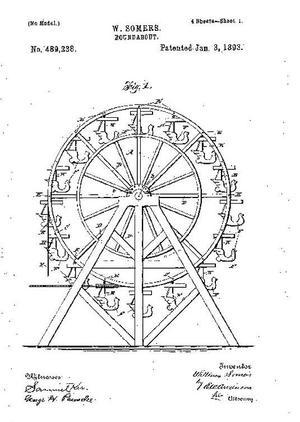 The loose antecedents to Ferris’s Wheel were the Carson River water wheel and Ezekiel’s Wheel.[2]  Ezekiel’s wheel is a reference to a vision seen by a man named Ezekiel during a sunset in Mesopotamia.[3]  The more closely related antecedents are an amusement wheel found in seventeenth-century Bulgaria and Somer’s Wheel. The first record of an amusement wheel was on May 17, 1620 in Bulgaria, and was referred to as “The Great Cartwheel” by Peter Mundy, an English traveler.[4] Centuries later, William Somer filed a patent on October 28, 1891 for an amusement wheel which he titled a “Roundabout.”[5] His design was extremely similar to the design that the original Ferris Wheel would use in the near future, but there was a significant difference between the two wheels; Somer’s was made out of wood, whereas the Ferris Wheel would be made out of steel.

The original Ferris wheel was designed by Illinois engineer George Washington Gale Ferris as a signature landmark for the World’s Fair in Chicago in 1893.[6]  Ferris sketched his idea one evening during dinner, and his initial plans were never substantially altered.  Many of Ferris’s contemporaries were confident the project would fail, collapsing before completing a full rotation.  Ferris’s concession was provisionally accepted during the summer of 1892 before being almost immediately being revoked before being actually accepted on November 29, 1892.[7]  He used his own money to build the wheel, but had to compromise opening later than the rest of the fair. [8]

The wheel had an 825 foot circumference, was 250 feet in diameter, and 30 feet wide.[9] According to the Chicago Tribune, the “wheel is composed of two wheels of the same size connected and held together with rods and struts, which however, do not approach closer than twenty feet to the periphery.”[10]  Those concentric circles surrounded an iron axle 32 inches thick and 45 feet long.[11]  The inner parts of the wheel had a similar construction to that of a bicycle.[12]  Two one thousand horsepower engines power the fifty-six ton apparatus.[13]  At full capacity, the wheel held an astounding 1400 people.[14]  A single ride cost fifty cents and lasted twenty minutes in duration, making six stops to have passengers enter and exit their carriages.[15]

Figure 4: Photograph from on the Original Ferris Wheel Figure 5: Up Close View of the Cars