Brief Overview of the Fair

The Chicago’s Columbian Exposition in 1893 at Jackson Park was a grand showcase of new technologies and a place of entertainment. The Chicago World’s Fair was also an opportunity for the United States to display its wealth and innovations. In addition, as David Nye writes in Electrifying America: Social Meanings of a New Technology, it was the opportunity to “outdo all previous efforts” of the prior World’s Fairs “by escalating both the scale and the completeness of displays.”[1] The Chicago World’s Fair remains a distinct example of a World’s Fair today because it succeeded in showmanship and uniqueness. One of the most important aspects of the fair that separated it from prior fairs was that all of the buildings on the grounds were painted a bright, crisp, and futuristic white, giving the fair grounds the infamous nickname: “The White City.”

Some of the main attractions at the fair included the Manufactures and Liberal Arts Building, Buffalo Bill’s Wild West Show, the Women’s Building, the Transportation Building, the Electricity Building, various state and foreign sites and buildings, and the Midway Plaisance. [2][3] 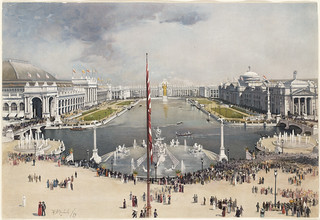 As written about in the New York Times in 1893, the Midway Plaisance was a “distinct feature, a separate thing- a ‘side show’” costing “from 10 to 50 cents” per exhibition.[4] The Midway was home to a variety of attractions, most of which were different ethnic villages (such as Turkish, Chinese, African, Native American), concerts and theatres. As described in the Washington Post that same year,  “there are ten theaters on the Plaisance typical of the customs of as many nations.”[5] However, the most memorable attraction of the Midway was neither a show nor a village, but instead, as the Chicago Daily Tribune wrote, a “gigantic toy.”[6] 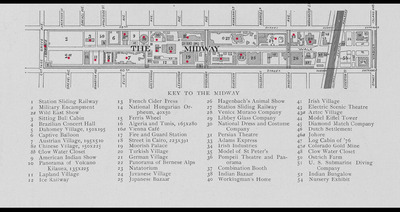 Figure 3: Map of the Midway Plaisance

The Ferris Wheel was not only the highlight of the Midway, but also as the Chicago Daily Tribune wrote, “the landmark of the Fair.”[7] Its popularity was due to its uniqueness and massive size but also stemmed from its round the clock appeal. “Studded with lamps eighteen inches apart,” as Nye describes, the Ferris Wheel continued to run during the night hours of the fair, however; in The Devil in the White City, Erik Larson notes that the “favorite hour was golding time between five and six in the evening.”[8][9] With sunset rides, “the Ferris Wheel became a vector for love,” resulting in many marriage proposals once the wheel reached its highest point in the rotation.[10] The romanticization of the Ferris Wheel was not purely circumstantial; however, the newspapers wrote about the Ferris Wheel with awe.

“Nobody but the man in the moon as he spins through space on his fiery chariot ever took so strange a ride…Up and down the plaisance streamed a black river of people, all looking upward in envy at the swinging cars. Scarcely any motion was perceptible to those who enjoyed the trip. The earth seemed to gradually melt away and then as gradually grow near. At intervals the wheel was stopped and new carloads of people were admitted, until nearly 1,000 people were swinging round the great circle. In thirty minutes two revolutions of the wheel had been completed and the first carloads were ready to step out again on the ‘too, too solid earth.’”-Chicago Daily Tribune (June 22, 1893)[11] 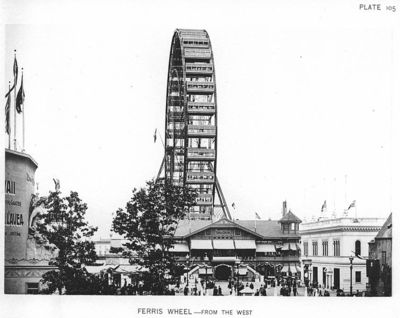 Figure 4: Ferris Wheel From The West

The ride on the wheel cost 50 cents and as the Chicago Daily Tribune reports, within four months after its opening (June 21, 1893 to October 21, 1893), the Ferris Wheel rides made “1, 253, 885” dollars.[12]  Furthermore, the Chicago Daily Tribune reports that the day with the most the riders was the ninth of October, which was celebrated as “Chicago Day.” On Chicago Day the ride operators “registered 34, 451” riders, “805” of which rode the wheel “before 8 a.m.”[13] In addition, even the slowest day, which was in August, had over a thousand riders. It was the most popular exhibit at the fair.

Today, the Midway Plaisance is a park within the South Side of Chicago. Where G.W.G. Ferris’s Wheel approximately stood, there is now the outdoor Midway Plaisance Ice Rink, which still provides amusement to visitors just as the Ferris Wheel did over a hundred years ago.